Frequently asked questions (and answers) to the most common interrogations related to cleanroom design, engineering, and manufacturing.

To put it simply, a cleanroom is a room that is clean. An enclosed space in which the concentration of airborne particles is controlled, and constructed in a manner to minimize the introduction, generation, and retention of particles inside the room. Other parameters, such as temperature, humidity, and pressure, might be controlled as well, depending on the application and process.

What is a Modular Cleanroom?

What is a Modular Cleanroom?

As opposed to cleanrooms built with traditional construction, or stick-built (drywall/gypsum), modular cleanrooms (also referred to as modular clean rooms) are built with factory-produced pre-engineered solid panels that are independent, robust, and faster to install. Modular cleanrooms are an asset that can be removed, relocated, expanded, sold, and/or easily reconfigured and repurposed, unlike old-fashioned stick-built.

** Old FS 209 classes were calculated in cubic feet of air, whereas ISO classes are in cubic meter of air.

What is a Cleanroom Grade A, B, C and D?

What is a Cleanroom Grade A, B, C and D?

In the sterile drug manufacturing industry, there are 4 grades: A, B, C and D.

The airborne particulate classification for grades A, B, C, D are given in the following table:

What is the difference between positive and negative pressure in cleanrooms?

What is the difference between positive and negative pressure in cleanrooms?

Positive air pressure will make the airflow leak out of the room, instead of in, thus preventing unfiltered air or air particulates from entering the cleanroom. Simply put, to achieve positive pressure, more filtered air is pumped inside the clean zone to create a greater pressure differential than the adjacent, less clean rooms. Positive pressure is used in cleanrooms where the priority is keeping any germs or contaminants out of the cleanroom, to protect the manufacturing process. 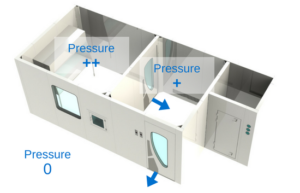 Negative pressure is used in cleanrooms to prevent potentially hazardous contaminated air, from escaping the room. Negative air pressure cleanroom means more air is pumped out of the room, rather than in, which makes the pressure lower than the adjacent environment, and serves to protect the user and the environment.